On Sunday afternoon, we had a "braai" on the deck, braai is the Afrikaans word for barbecue and all South Africans use that word. Who doesn't love a good braai? It went well and Caleb even concocted an on-the-spot dessert. I commend him, he just through some stuff together and it turned out brilliantly, everyone enjoyed it! It's so nice to be out on the deck in the fresh air.....

This week was a trying time for Blitzy, on Tuesday morning, we took her to the vet for her monthly tablet. She is usually quite calm and before she knows it, the vet has given her the tablet and she is on her way home again. This time however, the vet tried to give it to her by hand instead of using the pill dispensing instrument and that was a bad idea. This made her quite upset, she even gave the vet a little scratch. Blitzy was quite fidgety and she moved a bit as the vet was giving the tablet so we weren't sure whether it went down her throat or if she spat it out. Well, we looked everywhere for it but to no avail so we presumed that the tablet was given.....
Later that day, I noticed that the tablet was stuck onto her fur! She didn't digest it after all! Well, we had to go back to the vet a day or so later but her usual vet was performing an operation at the time so, we went to the other vet there. He used the instrument but she spat it out several times and then became quite "woedend", as they say in Afrikaans!! This means furious, really, really angry!
She gave this vet a nasty scratch on his arm and she broke free from my grasp and as she did so, her claw snagged my hand......ouch! It was not normal to see her like this, poor little Blitzy. Eventually the tablet went down and the vet suggested using drops instead of the tablet, we'll do that the next time for sure! Blitzy was fine for the rest of the day though.

On a lighter note, I've started cross-stitching once again! Well, in 2014, I entered my cross-stitched picture in the Royal Agricultural Show and it won 1st prize! Well, if you win, you are not allowed to enter in that same category of crafts again the next year, so I didn't enter in 2015 but this year I'm eligible to enter in the cross-stitching category since it's 2016! I won't show you the picture until I have completely finished it but here is a hint : Joshy & Blitzy are in the picture this time instead of Curly.
If you remember from the last time I did that picture, Blitzy loved to sit on the material in the hoop and liked catching the thread as I pulled it through. She hasn't forgotten about that because as soon as I pulled that hoop out again and began cross-stitching, she was at my side! It's actually quite dangerous for her because of the needle so I try to do it it discreetly or when she is asleep or even in another room. It's safer that way!


The kids at dinner time, all assembled in the kitchen. 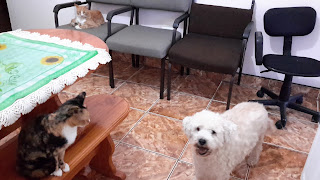 These beautiful flowers outside Bible House and our church. 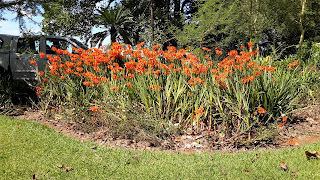 Blitzy the day before her vet trip, how innocent? 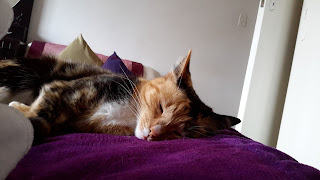 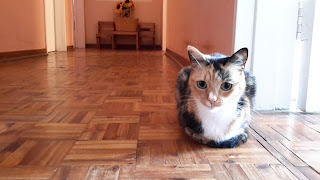 This is after the tablet ordeal, she fell asleep with her head hanging down! 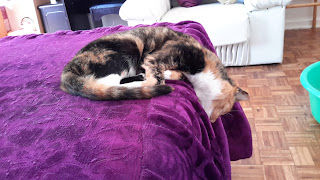 And woke up with a fussy look on her face. 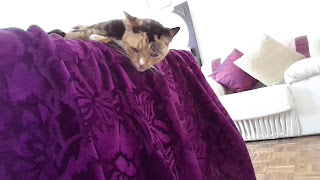 Blitzy on the cross-stitching hoop. 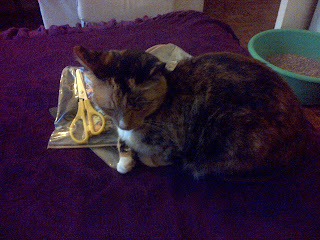 When I came out of the shower, all 3 kids were in my room, waiting for dinner! 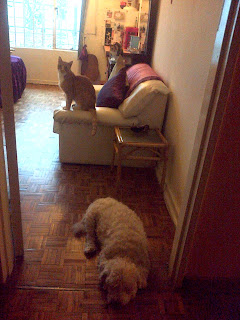 Joshy and Blitzy having a staring competition. 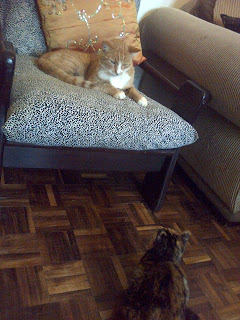 My Dad is a wonderful artist...here are some of his paintings. This is my favorite. 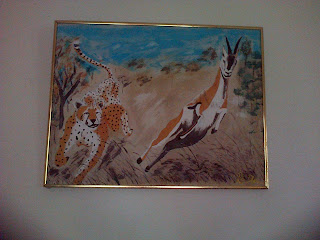 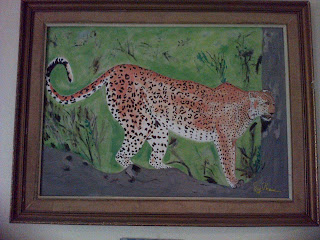