I don't have much news since my last post but I just decided to share a few photo's. ;)

We are already into the month of December! Time flies! With Christmas just a few weeks away, everyone is getting into the festive mood. We haven't put our Christmas tree up just yet but hopefully we will get around to doing that soon!
Well, my parents' clients and employees have already given us early Christmas gifts! We had received so many gifts from them last year and this year was no different! Many boxes of chocolates and cookies and other sweet things.

I think I can safely conclude that summer has reached Claridge for good though we do experience a few cooler days inbetween........I receive those days with two hands! I really do prefer cool, even cold, days with lots of rain and mist.....yep, that's me! However, I've learnt to enjoy all seasons!

This week I got to reconnect with an old friend from New Zealand! We used to live in Auckland, New Zealand when I was little. Now there's a fun fact that you didn't know about me! Or did I already mention it at some point? Perhaps so, anyway, this friend of mine is my age and it was really nice to hear where she was in life, academically and spititually. Her name is Esther Koshy and she was happy to hear that I knew another Ester, just without the letter "h". The other Ester was recently married, I posted about that last month. Anyway, this Esther and her family were family friends to my family whilst we lived in New Zealand. We tried to keep in contact as we grew up, Esther and I were almost 5 years old when we returned to South Africa. Yes, we were quite small!! We would send letters periodically and then we began emailing each other not long after we moved to Claridge. Then, life got busy and I'd say that we both just didn't get a chance to email one another! Like I mentioned above, we reconnected this week and have made the time to catch up a bit! We exchanged photo's too, that reminded me how the years have just flown by!

Oh! I almost forgot! Yesterday, a big monkey was at our door, my Mom saw him and tried to chase him away but he wasn't scared at all! The monkeys that live here are used to people to some extent. Most times, they'd run away when they spot you but there are some braver ones that don't seem to care at all! So, later on, just Caleb and I were at home. We heard a soft nudge against the gate. I decided to check it out, I walked right to the gate and there was another monkey! He had lifted up our rubber mat and carefully laid it against the gate, that's the noise we had heard! He didn't even notice me approaching him and was indulging himself on the beetles and other little bugs that were underneath the mat! I tried clapping loudly, he did get a shock but wasn't afraid of me. He just stared and lazily walked away and climbed up our Litchi tree! How smart and brave! Unfortunately, I didn't have my tablet or phone on hand to take a photo of the monkey! This morning, the birds rushed for the bugs. We dont usually have many bugs in that spot but since it's Summer now, they have started to come during the night. Lots of them come after it has rained too.

Hmmm......what started out as a short post ended off as being a decent sized one, I would say! 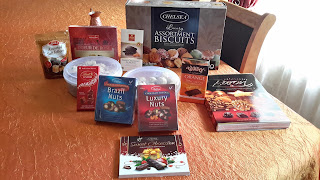 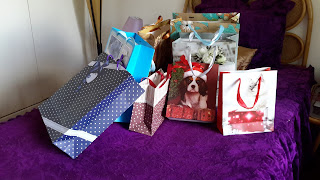 I have no idea why Joshy chose this specific spot to sleep! 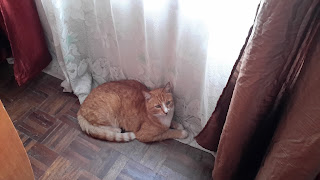 Blitzy relaxing at the window. 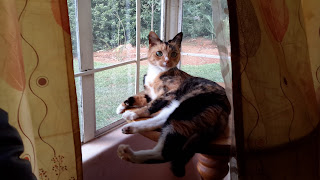 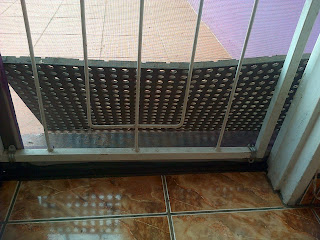 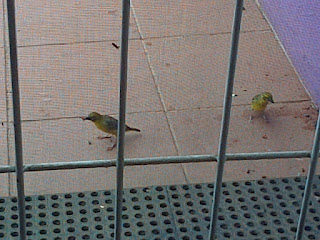