Special Visitors and a Special Friendship

Well, we had a blessed and busy week. :)

On Friday the De Wet family came for a visit! It was so lovely to have them here, we invited them over for breakfast and dinner on Saturday. Jakobus is Afrikaans and his wife, Galina is Russian American. Her maiden name was Celick and yes, she is Dasha and Jessica's older sister! I mentioned the De Wet's in one of my previous posts when we visited Goldfields Mission in Virginia.
Click here to read
They have 3 adorable kids, Nadine, Janet and Josua. Curly was extremely jealous when I gave these kids any attention. She was glued to me and wouldn't let me out of her sight!

Just after breakfast, we saw the Joosten family coming up our driveway! What a special surprise! It was Onkel Hogard and Tante Inge with their granddaughter, Elona. Onkel and Tante mean "Uncle and Aunt" in German. I had recently phoned Elona and we spoke about about her visiting sometime soon, Lord willing. I didn't realise that it would be this soon! We had afternoon tea together and it was a blessed time. Later, Elona, Galina and I went for a quick walk. We took little Josua along too, in his baby stroller/pram.
Saturday was also the funeral of a member from our congregation. Everyone called her Gogo Ndlovu, "gogo" is the Zulu word for "grandmother".
Anyway, the De Wet family left on Sunday morning, it's a long drive back home!

My Grandmother was with us for one week and my parents have been visiting my Uncle in hospital daily. He is still in a lot of pain, we just pray that God's will shall be done.
On Sunday, the main road was blocked temporarily so, not many people could make it to church. We watched the service from the main mission via Livestream as we did last week too. It was Sebastian Merlo and Johanna van Vuuren's wedding, Sebastian is from France and Johanna is an Afrikaans girl. Uncle Erlo took the sermon and it was translated into French and Zulu. You can watch it here .
Remember, it's only uploaded onto Livestream for a limited time.

Oh, Blitzy had been hunting this large lizard in my parents room for quite some time. A few months, maybe. It was initially in Caleb's room and she found it then it raced to my Mom's Aunt's room and it hid there for a week or two. Joshy even tried to locate it but he soon lost interest. Blitzy would check every few days and if she saw him, she'd wait for hours at that spot. At some point, this lizard moved into my parents room, he became quite fat too! Blitzy would look for him whenever she entered the room. This week, he surfaced his big head and she caught him. She did catch him before but she would just play with him and then let him go or he would scurry away when she's not looking. This time, I think she used her sharp claws on him as she poked and prodded him. I just say "him" but it could've been a female lizard, I dont know. Anyway, he was walking really slowly and he had lost a lot of weight, we thought that he would eventually die if he remained inside at the mercy of little Blitzy so, my Mom opened the window and set him free! As soon as his little feet touched the deck floor outside, he raced off! So he wasn't hurt or anything, he was probably just playing dead! Although, he was getting rather thin so it's good that we let him go. Blitzy was so sad I felt bad for her, her "playmate" was gone!
Joshy is doing much better these days, he's not scared anymore! I saw that he had a wound on his head, he must've hurt himself somewhere during that windstorm. We thank the Lord for bringing him home and that the wound is healing.

I just saw the pageview count and it's over 4 000 views already! Wow! Thank you!


Blitzy and her lizard "friend". 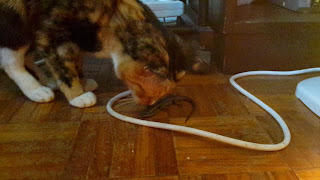 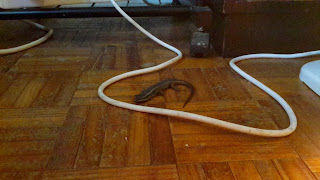 Joshy and Blitzy looking for that lizard in my parents room. 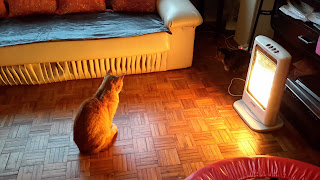 Curly on the deck 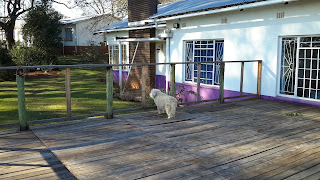 Curly on her sofa. 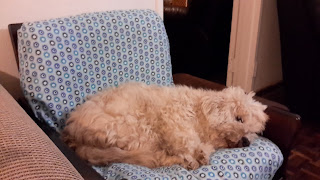