A Visit From Virginia

This weekend has been another blessed one, we made some wonderful memories with lovely people. On Friday morning, an all girl team consisting of 4 came from Goldfields Mission in Virginia, Free State. This is the same mission that we went to in October for Ester and Pieter's wedding. Anyway, those who came were : an Afrikaans girl named Ilze, an Indian girl named Shalona, a visitor from Germany named Christina and also a Russian American girl named Dasha Celick! Dasha is Jessica's older sister and one of 8 kids from the Celick family. My parents stayed in the Celick's house in America when they went on the preaching tour last year.  Dasha works at the bakery at Goldfields Mission.

It was nice having them with us this weekend, though they left on Saturday after breakfast....yes, they stayed just one night. :(
On Friday, we took them to do a little shopping, we went to various clothing and miscellaneous stores. Then, later on, I went with them for a nice walk around the farm, we got some good exercise out of it! They had dinner at our house, we had it on the deck. The girls must've been quite tired at the end of that day because they left really early to arrive in Claridge at mid-morning. The next morning (today), we also ate on the deck with them. We are so thankful for the deck, it's nice to be on it.....
Like I said, after breakfast, they headed to the main mission to drop Christina off and will leave tomorrow after the Sunday service. There is also a wedding at the main mission tomorrow.

I don't think I mentioned this before but there is a lovely American couple staying on the mission here in Claridge and they have been such a blessing to all of us. Their daughter was in an accident over 2 months ago and she's still in hospital. They are with her everyday, for the entire day. We are thankful that Suzanne (the daughter) is making a lot of progress now and they will fly home very soon. We sure will miss them though, they are very special!!

We are expecting really hot weather from tomorrow until Wednesday.....so, we have our fans, ice cream and fruit salad ready for these scorching days ahead! 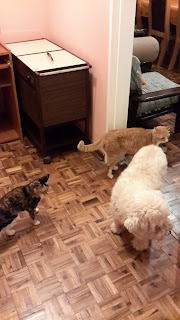 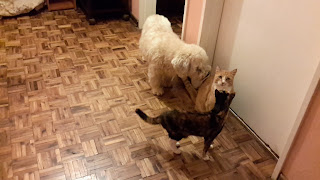 This road is actually quite steep and one really feels exercised after trying it. 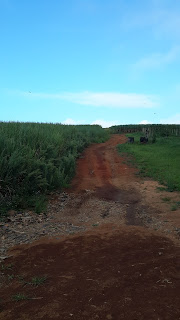 Our house, deck and the palm tree, miles away from the beach! 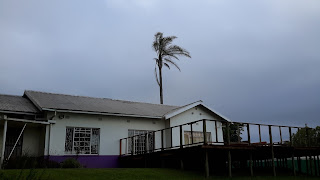 The train that regularly passes through. 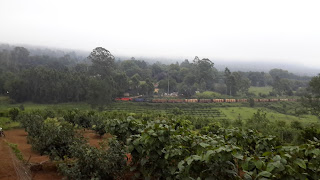 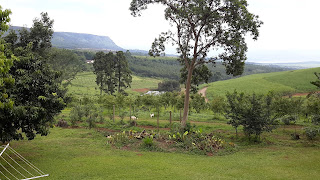 If you look closely, you'll see Curly and Lassie on the dirt road. I was on the deck when I spotted them!